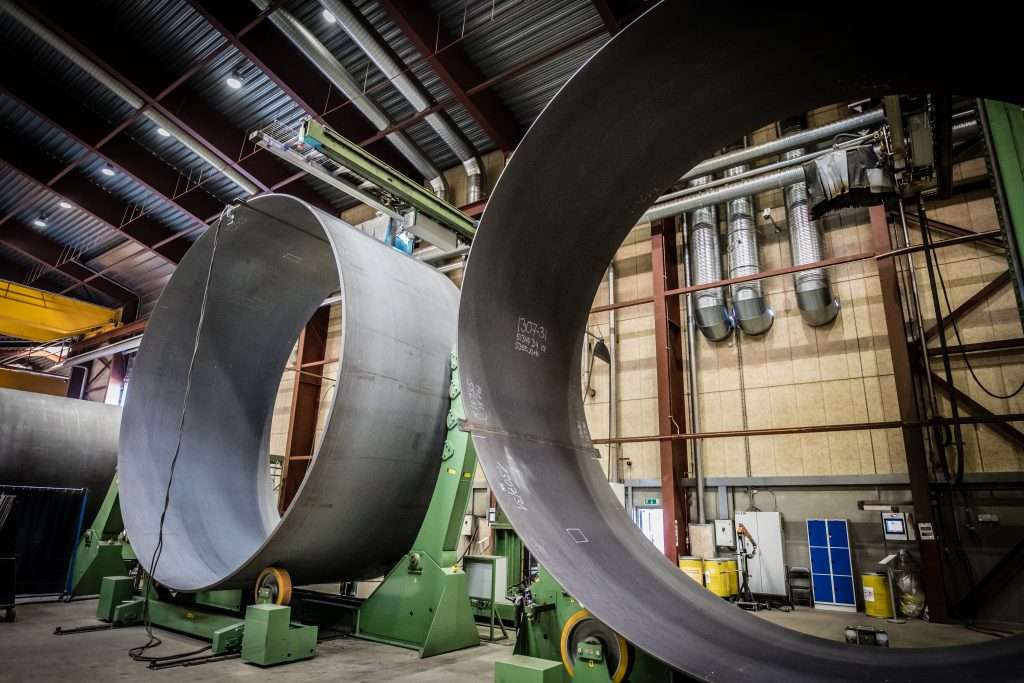 The Danish subcontractor to the wind turbine industry Welcon manufactures tower sections weighing up to 230 tonnes in a production with 40 halls. Within the past two years, the company has implemented ground-breaking adaptive robot welding through Inrotech in Funen, for which the integrator company was nominated for the DIRA Automation Award this year.

In the small Danish town of Give, between Vejle and Herning, is today what can be described as one of the world’s largest single factories for the production of tower sections for the wind turbine industry in the form of the company Welcon A/S. Last year, 65,861 tonnes of steel plate were driven through production. When the huge slab sections with a thickness of up to 105 millimetres enter the factory, they are quality checked and cut to size (including joint preparation). This is done on the company’s own machine for flame cutting, after which the items are sent on for rolling and welding.

The rolling process, which takes place on a number of large machines for the purpose, is prepared for a future where the pipe profiles reach ten meters in diameter, but currently the maximum size is seven meters in diameter. The size level of the pipe profiles is constantly changing, as the largest wind turbines in the industry are constantly growing with the desire to increase the megawatt capacity in order to reduce the total price of wind energy.

Using a special lifting process, the tonnage plates are placed in place in the company’s various rolling steps controlled by down to one employee, after which they are finally ready to be joined with the company’s newly introduced welding robots.

The joining process takes place with two welds, externally and internally on the workpiece. But it is especially the first external welding that has made industry people open their eyes. This takes place unmanned with robot technology from the innovative Danish manufacturer of adaptive welding robots Inrotech, which this year was nominated for the prestigious DIRA Automation Award 2018 for the company’s unique welding technology.

In fact, the technology is so special that the robot, without offline data on its own, scans itself to the required welding data on joints and geometry on each individual item, after which the employees basically just have to press a button to start the welding process.

One thing is a sales talk about the excellence of the system, something else is to see the process of the ton-heavy topics being done live. This was seen by a crowd of industry professionals and members of the Danish Robot Association DIRA, when in connection with Inrotech’s nomination for the automation award, they were allowed to visit the production in central Jutland. The attendees thus got a guided tour of the production, which ended with the sight of the now six robots at the manufacturer in the process of making live welding high up under the ceiling in one of the company’s 40 production halls.

That one of the world’s largest single factories for the production of tower sections is Danish is certainly not a matter of course, was the message on the day from Welcon’s project manager, Dennis Riedel, who has been responsible for the welding robot implementation in collaboration with Inrotech.

It is not an easy task to find professionals in Denmark who want to work with welding of large-scale items, and for that reason a large part of the workforce today is from a number of countries far from Denmark’s borders, mainly in Eastern Europe.

At the same time, there are certain logistical challenges at the geographical location. But nonetheless, the company is currently in better shape than anyone, says Dennis Riedel, who attributes to the success an eternal striving to live up to customers’ wishes for flexibility and quality, and that items and components are delivered exactly where the customer wants it – and at the scheduled time.

Furthermore, the long experience with the preparation and management of documentation helps, he points out. This enables the company to handle all desired requirements for the documentation of the finished items.

“We are a company that has all levels of resolution gathered in one place. From the engineering department, which is helpful with the design, construction and documentation of the project and items, throughout the production, to the top experience that can set aside money for investments” highlighted Dennis Riedel on the day, adding “This means in everyday life that the reaction time from decision to action is incredibly short, which makes it possible to implement new innovative ways of manufacturing our products without having to go through major bureaucratic obstacles. It is a great competitive advantage. “